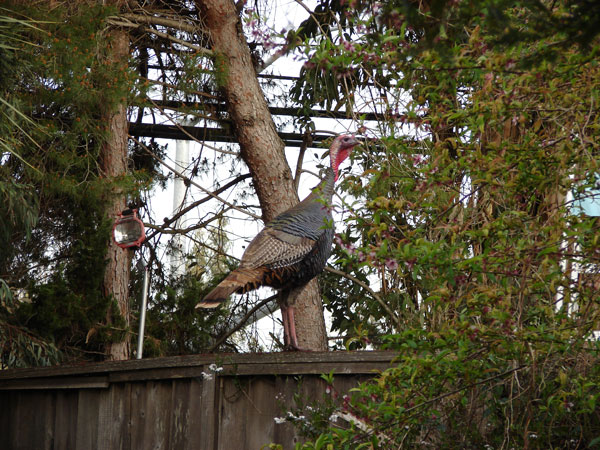 On March 27th, I was up early working at my computer with my balcony door open (which is pretty usual—I like lots of fresh air). I kept hearing what sounded like a turkey gobbling coming from down the street, but told myself it couldn’t be so, could it? It could have been a very weird dog.

The gobbling got closer and closer until it was coming from right in front of my house, at which point I had to get up to go check it out, because now it sounded unmistakably like a turkey. Sure enough, there in my front lawn was a young-looking turkey, strutting around. As soon as I stepped onto the balcony, though, it whisked around the corner into my side yard. I never realized that the land speed of a turkey was so fast.

I grabbed my camera and ran downstairs, then snuck quietly out the back door. It tried to come into my back yard but was foiled by the iron gate. When I came out, it turned around and headed for the northwest corner of my yard. I got a few pictures, one that isn’t very clear at all, one under the redwoods (taken through the iron gate), and a couple that I took by swinging wide and around the redwoods after it flew to the back fence. Then it spread its wings and flew away, rather gracefully and effortlessly for such a large bird.

This site uses Akismet to reduce spam. Learn how your comment data is processed.